‘SG: SW I Write The Songs’ Songwriting Festival is jointly presented by Singapore Chinese Cultural Centre, Composers & Authors Society of Singapore Ltd (COMPASS) and Ocean Butterflies Music. The 282 entries this year were from songwriters from all walks of life, including students, lawyers, doctors, solar engineers and more, and aged between 15 to 64 years old. Four of this year’s top 10 entries were written by students between 16 and 19 years old, with a student duo clinching two of the top 10 awards. The genres included tear-jerking ballad, blues, ballad with some electronic elements, and retro R&B. (Photo: Remember to Forget, Melody by Elton Lee and Lyrics by Jojo Teh)

Former winner of SG: SW 2017 Best Song Award, Elton Lee won two awards at this year, SG: SW 2022. Renowned Taiwanese producer-songwriter David Wu said, “ The lyrics, melody and singing of the song were very powerful, the emotions were well-conveyed, and the song was beautifully sung. You might be the next JJ Lin.”

Singapore Cultural Medallion Award recipient Dr Liang Wern Fook also commented that “After 5 years, life experiences have made you a mature singer, and you conveyed the strong emotions of the songs through your singing, which was very touching. You are still young and have a promising future ahead of you.” During the Masterclasses, the song “Remember Forget” received good comments from David Wu as the song that would make it to the top hit song of an album. Award-winning producer-songwriter Eric Ng also encouraged the duo to create more compositions.

A Younger Pool Of Talents, With Four Participants Under 19 Years Of Age

This year, two out of the six awards were given to songwriters under 19 years of age. Considering their young age, it is impressive that they have attained such high standards in their work. Among this year’s top 10 entries, four were written by students aged between 16 and 19, with a student duo clinching two of the top 10 awards. David Wu commented, “SG: SW provides a very good platform for young people to showcase their talents. I am touched and impressed to see the performances by participants as young as 16 years old. To those who were not selected this year, do not give up. Take the time to improve and try again next year. SG: SW is a great platform to launch your career in the music industry.”

Would You Stay clinched the Lyrics (Merit) Award (Photo: Would You Stay, Melody by Edmund Ng and Lyrics by Lee Jia Min)

Known as the strongest student duo, this is the first collaboration between Lee Jia Min and Edmund Ng, who met at SG: SW 2020. Both songs they wrote, “In The Name of Youth” and “Would You Stay”, made it to the finale concert. Would You Stay, a song about the longing for love and attention in a relationship, impressed the judges and clinched the lyrics (Merit) Award. The strong lyrics and the arrangement of the song impressed the judges. Renowned music producer and music director of OB Music, Zennon Goh, commented, “The song arrangement is excellent and has great potential.” Maniac, by 19-year-old songwriter Lim Zheng Bo won the popularity award with the highest number of online votes. The song was praised by the judges for its well-written lyrics and melody. His powerful voice, accompanied by his performance, conveyed the mental state of a ‘maniac’. Dr Liang Wern Fook commented, “The future of this generation of young people is limitless. Although I watched the performance online, I could feel the onsite atmosphere and the wholesome performance.“

LOVE IS YOU  clinched the Best Vocal Performance Award (Photo: LOVE IS YOU, Melody by Ti Kiang Heng and Lyrics by Xiaojiu)

LOVE IS YOU is a sweet confession of love, whose lyrics are inspired by the pandemic where everyone was wearing masks which created an air of mystery and romantic possibilities between people. The melody is by Ti Kiang Heng, whose song Love Deserter in SG: SW 2021 won the SCCC Xchange Award and Best Vocal Performance Award.  Accompanied by a group of performers dressed in pink, the song was sung against a captivating backdrop of pink bubbles. Mediacorp Radio Station YES 933 DJ Zhong Kunhua thought that the song had the potential to be the soundtrack of a Korean drama. Shape Of Love is a ballad-like love song inspired by the soundtrack of a Korean drama, expressing the psychological struggles of a girl in her love life, and  Zhong Kunhua expressed that it had the potential to be a popular karaoke song. Zennon Goh commented that he was impressed by the well-integrated combination of lyrics, melody arrangement, and passion the song conveys.

Lyrics (Merit) Award: Would You Stay

About 【SG:SW I Write The Songs】 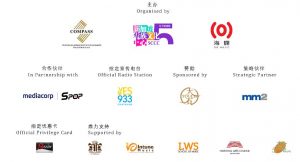