After four months of mentorship and shortlisting, the fifth edition of ‘SG:SW I Write The Songs’ Songwriting Festival, organised by Composers & Authors Society of Singapore (COMPASS), Singapore Chinese Cultural Centre (SCCC), and Ocean Butterflies Music,  returned with an Online Finale Concert where the Top 10 finalists took the stage at the Singapore Chinese Cultural Centre Far East Organization Auditorium last night, graced by special guest, Sim Ann, Senior Minister of State in the Ministry of Foreign Affairs and the Ministry of National Development. The song To Sea《我带您去看海了》composed by 17 year-old Jayne Peh won not just one but two awards this year, namely for Best Song Award and Lyrics (Merit) Award. (Photo: To Sea, Melody and Lyrics by Jayne Peh)

Commenting on Jayne’s work after her performance at the Online Finale Concert, renowned Taiwanese producer-songwriter Rachel Ting said, ”The lyrics, melody and arrangement sounded simple but were well-integrated when put together. To be able to do this is not simple at all. The arrangement transitioned from simple to complex, creating a strong imagery that was very powerful and touching. I almost cried…  I hope to see you shine in the music industry one day. ”

Cultural Medallion Award Recipient Dr Liang Wern Fook also commented that “There are many good songs out there, but not many are poetic. This song is just that. I sometimes feel that the unique and precious quality of songwriters can be seen at the beginning of their career when they are at their purest…I hope that you will always remember your most original style, and hear more of your works in the future. ”

Even during the Online Live Showcases and Online Masterclasses, her composition had won praises. The lyrics were also written in Chinese, English and Hokkien to express the feelings of missing of a loved one who has passed on. In the final version, Jayne took the mentors’ (Rachel Ting and Roy Li) advice and rewrote the lyrics of the chorus. She also refined the rhyming of the Hokkien lyrics and revised the melody so that the song’s ending was more impactful.

This year, three out of seven awards were swept by songwriters under 19 years of age. It has also been heartening to see more winning entries integrating Singapore’s distinctive cultural elements and languages in their compositions.

This year’s “SG:SW 2021” attracted more young songwriters, with almost 40% of the participants under 25 years of age, which is higher than the 33% last year and 36% the year before. Five of the top 10 finalists are  17 or 18 years old. While concluding the performances of the Top 20 song entries during the ‘Online Live Showcase’, Zennon Goh, Resident Judge of the festival and Music Director of OB Music, expressed that, “This year, “SG:SW I Write The Songs” has continued despite the pandemic and we continue to see unwavering participation from songwriters. It is heartening to see more post-2000s young songwriting talents submitting high-quality works. With such commendable works. we can look forward to more exemplary works from the younger generation in the future!”

“SG:SW 2021” has received 306 entries this year from 266 participating songwriter. Although the total number of entries this year is slightly less than last year’s 322 songs, the number of participating songwriters has increased (compared to 261 participants from last year). The songwriters come from all walks of life, including students, lawyers, scientists and engineers. The themes of the final ten compositions were diverse and included commentary on livestream sales, addiction to video games, astrology, autistic children and a reinterpreting of xinyao incorporating kopitiam culture. 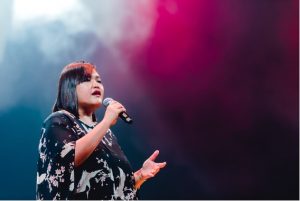 Yohannis’ confident stage presence and delicate performance wowed both audience and judges alike. She reminded many of Shila Amzah who participated in a Chinese singing competition in China several years ago, and whose singing career has since taken off. Language barriers did not affect Yohannis’ ability to give a breath-taking rendition of the song which had mainly Chinese lyrics. Having memorised the lyrics with the help of hanyu pinyin, she gave a masterful and captivating performance.

How was Yohannis discovered? Her teammate Ti Kiang Heng chanced upon her singing video when she took up a Duets challenge that he had posted on Tik Tok. He knew immediately that she was the most suitable singer to perform the song. Since Yohannis was Malay, Kiang Heng took the opportunity to invite her to translate some lyrics into Malay, so that the work could be eligible for the Singapore Chinese Cultural Centre Xchange Award. Kiang Heng later also incorporated Indian tabla accompaniment to enrich the multi-cultural flavour of the song.

During the Online Live Showcases, the judges had commended Yohannis’s performance and that Malay lyrics has enhanced to the song.

Compared with the previous SCCC Xchange Award winning songs, this cross-cultural collaboration is a fresh approach and has created a different spark! Game Addicted Girl challenged the stereotype that only guys get addicted to gaming. This twist drew listeners’ interest to the rap song composed by Timo Tan. The mentors also mentioned that the chosen theme had an element of surprise and left a deeper impression on listeners.

Dr Liang Wern Fook thought that the music had injected more energy and personality into the song, even though the lyrics seemed ordinary. As a result, he enjoyed listening to the song’s narrative during the performance. （Photo: Boss Not Around,  Melody and Lyrics by Morgan Law）

An electronic dance-song with melody and lyrics by Morgan Law, Boss Not Around highlighted the livestream sales that erupted during the pandemic. The song was made even more engaging by referring to the local getai performer-turned-livestream salesman “Fishmonger Bro”(卖鱼哥), which made the song even more relatable. Morgan also performed the song dressed up as “Fishmonger Bro”. The second hybrid format of ‘SG:SW 2021’ enabled the festival to reach out to both local and overseas audiences. The online livestreaming format also made it possible for Rachel Ting to join the panel of the judges during the “Online Finale Concert” through video conferencing in Taiwan. The ‘Online Live Showcase’ was a platform for the Top 20 songwriters to showcase their works. This year’s entries were diverse in nature and standards were high. The judging panel included renowned music practitioners Zennon Goh, Ling Kai, Jiu Jian, Zhang Si’er and Derrick Tham. After the ‘Online Live Showcase’, the songwriters of the Top 10 entries had the opportunity to attend ‘Online Masterclasses’ by renowned Taiwanese producer-songwriter Rachel Ting and singer-songwriter and producer Roy Li where their works were critiqued for further improvement. With the tips and knowledge gained from the ‘Online Masterclasses’, the participating songwriters then improved on their songs and presented the final versions at the ‘Online Finale Concert’.

Whether tear-jerking ballad, rap, rock and roll or dance tunes, the musical genres across the Top 10 finalists were distinct and diverse! (Photo: Mentor Rachel Ting with the songwriters of the Top 10 entries) (Photo: Mentor Roy Li with the songwriters of the Top 10 entries)