Modern Singapore’s story began shortly after the British arrived on our sunny shores. They recognised Singapore’s potential to become a thriving trading port. But to realise this dream, they needed some serious manpower! At the same time, economic and political unrest in China spurred many Chinese, especially from coastal cities in southern China, to make long journeys by boat in search of better fortunes and opportunities in Singapore and other places. Despite being reliant on imported labour, the British mainly saw the Chinese and other foreign communities as labour to grow the economy, and were not interested in their welfare.

Hence, migrants had to fend for themselves, by setting up clan associations, schools and temples to provide mutual social support.  When many migrants eventually settled down in Singapore and started their families here, they retained many traditional Chinese values, celebrated festivals and whipped up familiar flavours from home. At the same time, they were exposed to many new things in Singapore—understanding their Malay neighbours’ language, picking up terms from other Chinese dialect groups, adapting traditional recipes to incorporate local ingredients, and adopting local practices more suited to the tropical climate like building attap houses. The Chinese Singaporean culture we’ve come to know and love today is far more complex than most people realise. So, join us on a journey of discovery to find out more about what makes us so distinctive. Some of the festivals we observe are part of our unique Chinese Singaporean identity today. While we still continue to celebrate traditions brought over by our ancestors like the Zhongyuan Festival, many of these cultural practices based on religious beliefs are no longer so common in modern China. Think you know a lot about our local festivals? Test your knowledge here! A common theme that defines our local Chinese culture has been the mingling of different cultures to create a distinctive identity. Such diverse influences can come from within as well as beyond Singapore. For instance, our local Mandarin pop music scene reflects how we are connected to the world around us. Xinyao, which refers to “ballads created by young Singaporeans”, was a major trend in the 1980s. Young songwriters were greatly influenced by Taiwanese and Western pop music which they heard on radio, TV and films. Many of their songs and lyrics also took inspiration from life in Singapore and resonated amongst local youths at that time. 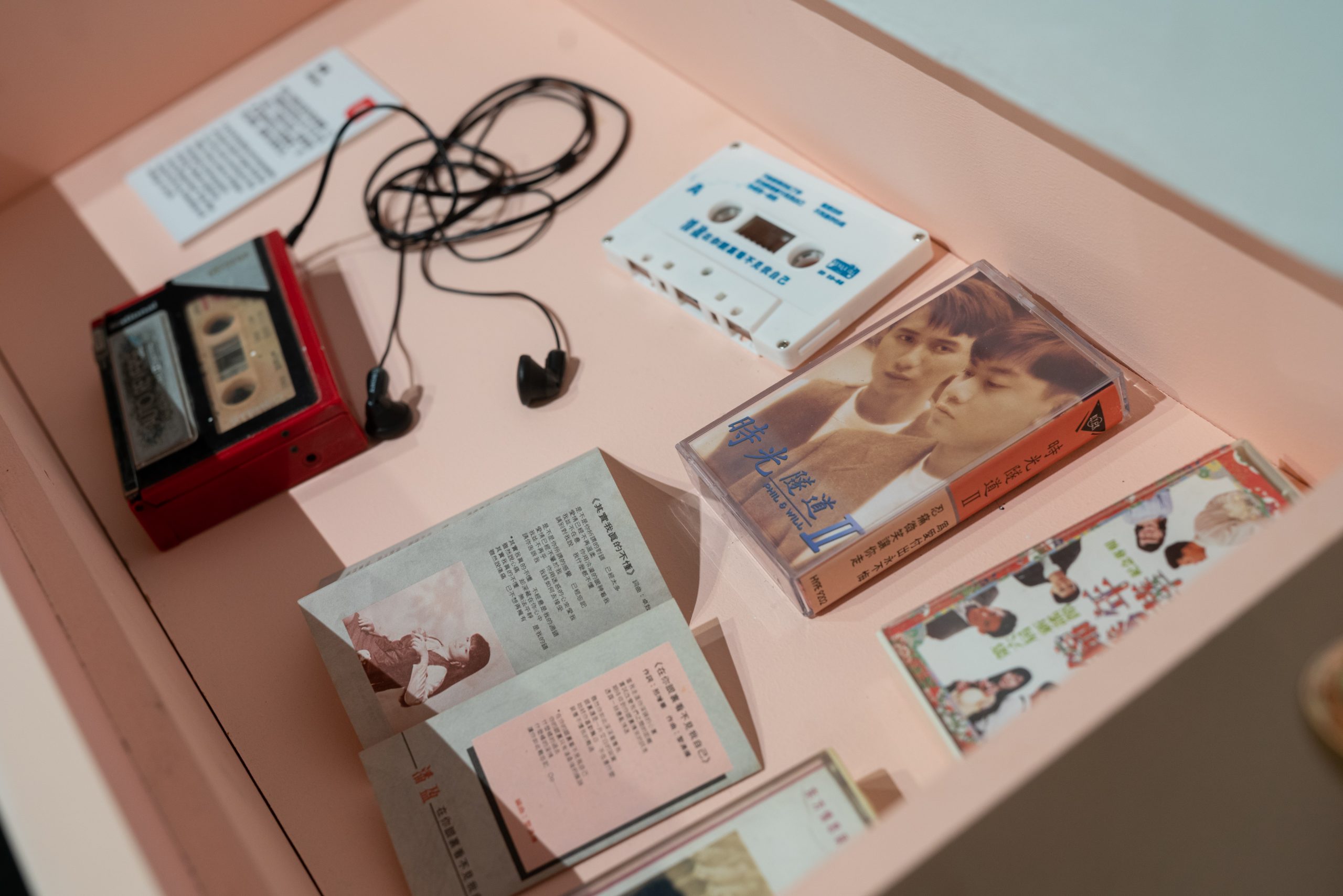 By the 1990s, our Chinese pop scene started developing a distinctive voice, which pushed our local music and artistes into the global limelight. The success of our xinyao pioneers led to the global success of local artistes such as Stefanie Sun and JJ Lin. Are you a budding local artiste? There are tons of ways to get heard, find out how!

Our Arts and Entertainment 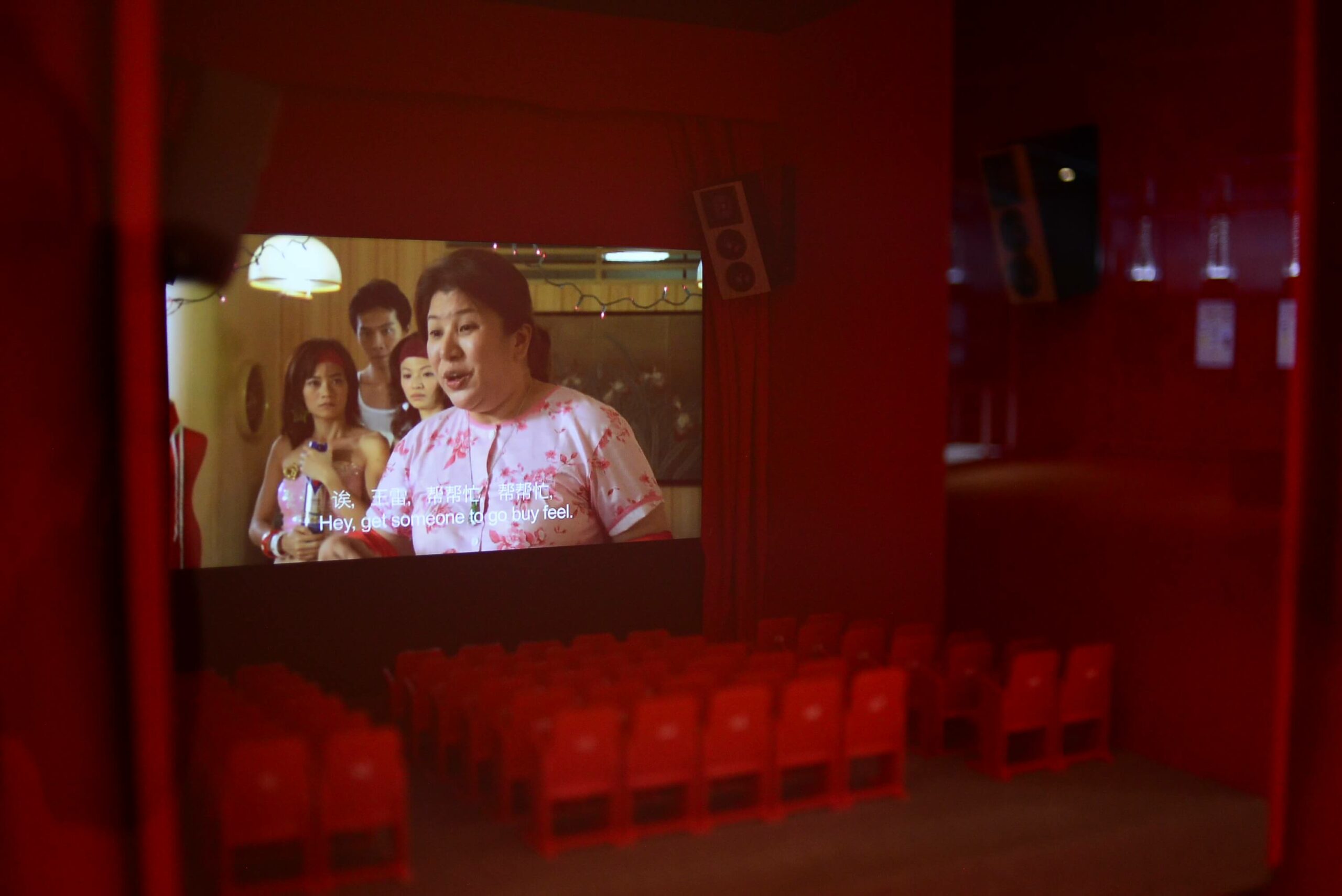 From music, to film and even design, our rojak of cultures is the foundation for our distinctively Singaporean identity. Did you know that Singapore had a golden era of film-making from the late-1940s to early-1970s? At the time, many Malay films were shot and produced by Cathay Organisation and Shaw Brothers! In 1960, Lion City (狮子城 in Chinese and Bandar Raya Singapura in Malay) was the first Chinese film produced by Cathay in postwar Singapore. Hundreds turned up to audition for roles in the film, which was produced by the newly formed Chinese section of Cathay. 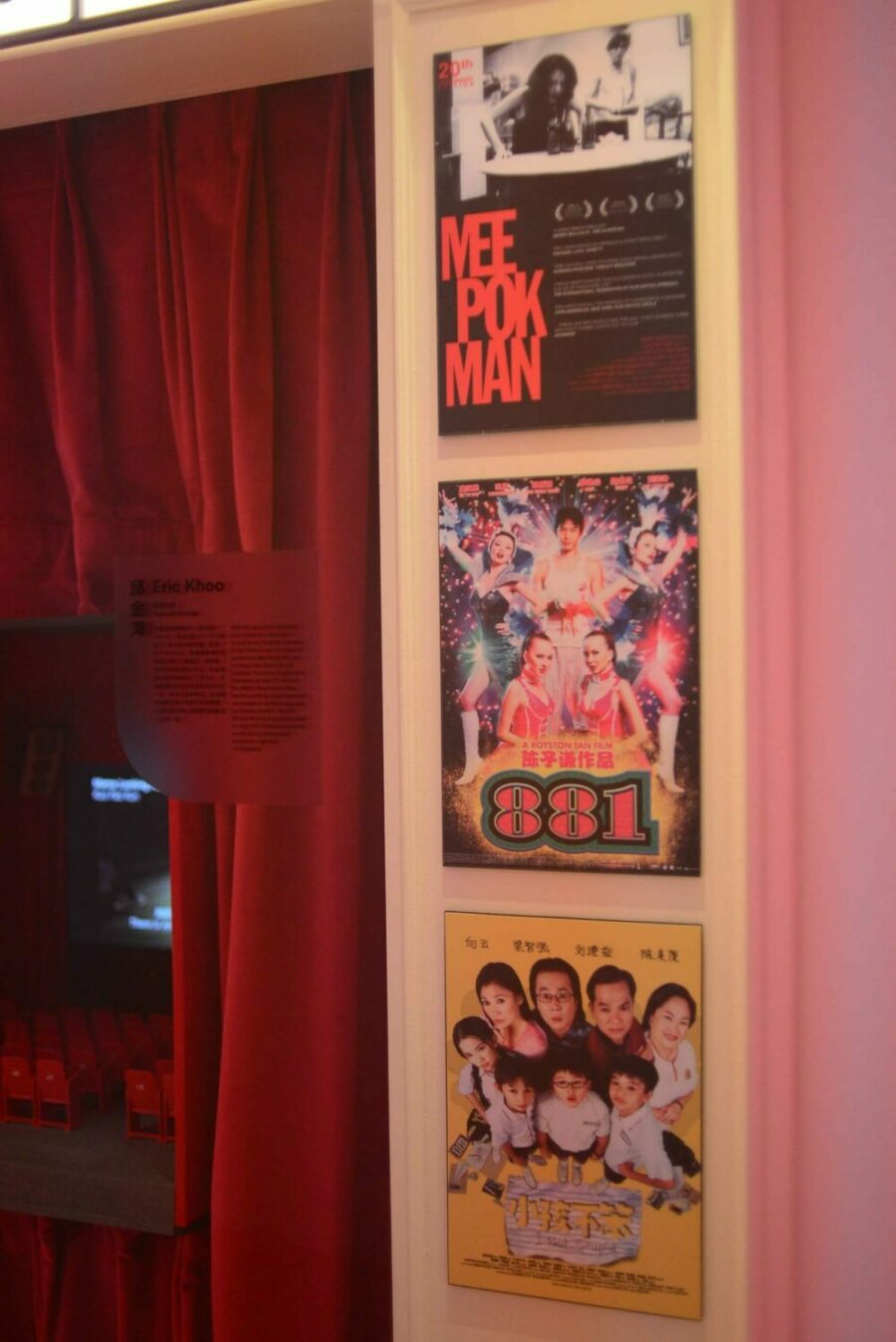 The interaction between different cultures may also be seen in the visual arts scene. For instance, painter Cheong Soo Pieng was born and trained in China but eventually settled down in Singapore in the late 1940s. His artworks often combined Western and Chinese influences. This can be seen in his paintings of local kampong landscapes in Chinese ink, but depicted in a Western cubist style. Today, this marriage of influences is seen in local artist Justin Lee’s works that fuse traditional Chinese motifs and contemporary Western styles.

Values are the cornerstone of our local Chinese culture and have shaped us into who we are today. While we practise them every day, we might not realise that these values are influenced by the philosophies of Confucianism, Taoism and Buddhism. Look around you. Look closely and see many values being observed and practised. For instance, whenever we take public buses or trains, you might have noticed the priority seat sign. Giving up seats to those who need it more reflects the value of kindness (仁). 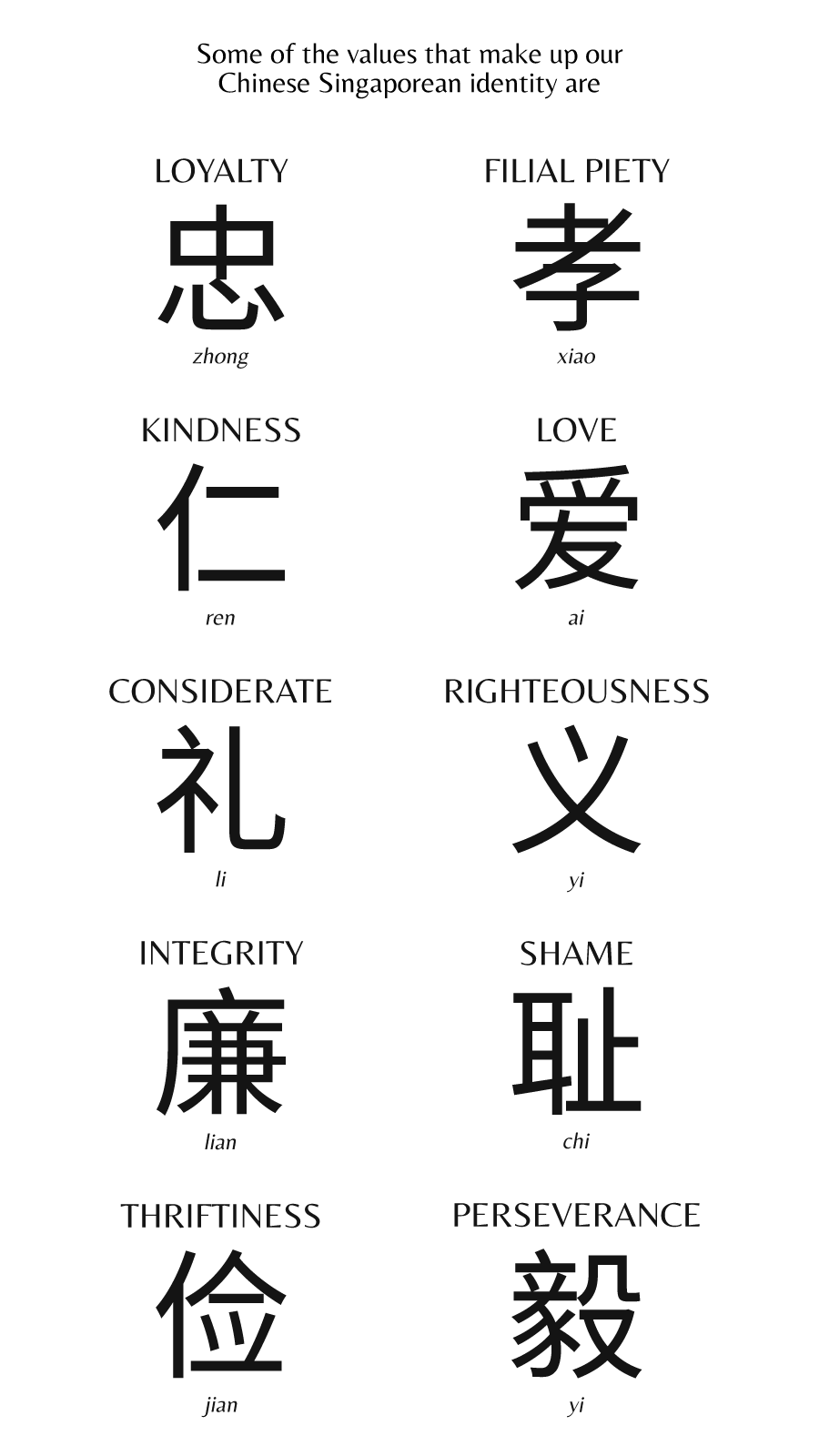 Getting a simple gift for our parents on Mothers’ and Fathers’ Day reflects our love (爱) and filial piety (孝) towards them! Filial piety holds so much weight in our culture that we have things like the Filial Piety Award, presented by the Nanyang Confucian Association, to encourage filial piety amongst the younger generation. What about other hawker favourites which we know and love? Well, some were introduced by the Hokkiens and Teochews. Migrants of these two dialect groups brought noodles and rice dishes that can still be found in their hometowns in China. When they arrived in Singapore, the dishes were made differently to adapt to local tastes and availability of local ingredients. This gave us some of the most famed hawker favourites such as hokkien mee and bak chor mee. Find out more when you explore the origins of these local Chinese dishes and more through our cinematic projection and displays at the #SINGAPO人 exhibition!

Singapore has long been praised by foodies for its tasty varied cuisines, thanks to the contributions of the various southern Chinese dialect groups and other ethnic groups that settled here in the early years. The Cantonese, who have started many restaurants, are known for their culinary techniques like flash frying, deep-frying and steaming. Fun fact: Originally a Hakka dish of stuffed beancurd, yong tau foo was given a different spin by the Cantonese with a greater range of ingredients, and this expanded version is commonly enjoyed in Singapore today! Did you know that it was the Hainanese who mainly contributed to the rise of coffeeshops in the local food scene from the early 20th century? Did you know: Even today, we converse in mixed languages and dialects just by ordering a cup of coffee from the local kopitiam!  Kopi peng siudai (iced coffee with less sugar) is a mix of Malay (kopi: coffee), Hokkien (peng: with ice) and Cantonese (siudai: less sugar) The daily mixing of languages has also given rise to unique literary forms which can be seen in the works of poet Khoo Seok Wan, such as when he composed a poem that transliterates Malay into Minnan dialect.

Did you know code-switching in Singapore could already be heard from as early as the 1800s? In A Description of Singapore 新加坡风土记, Li Zhongjue wrote about life in Singapore in 1887. He observed that most Chinese migrants had learnt Malay and English. Many of them used some Malay and English with their mother tongue (dialects) in daily conversations. 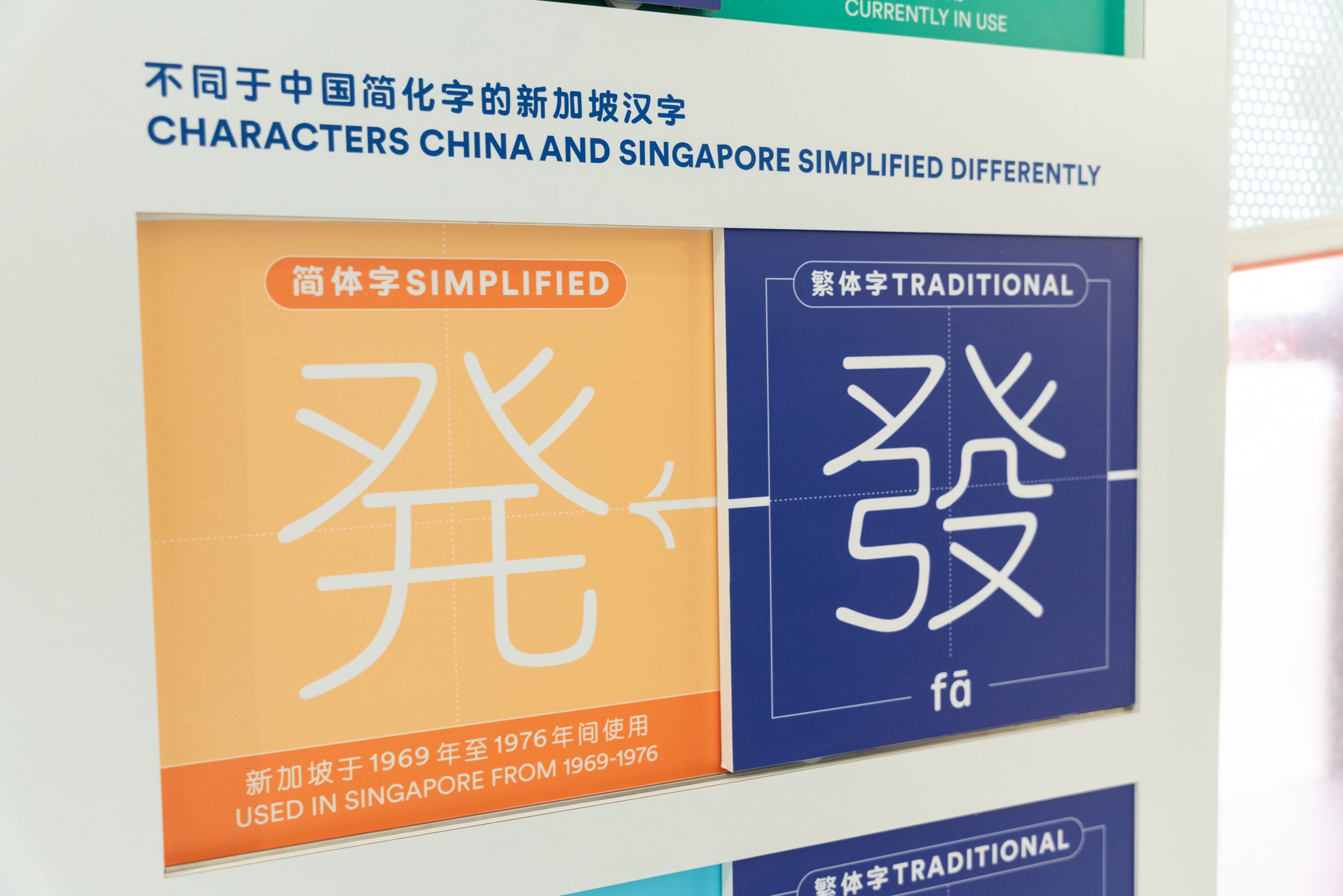